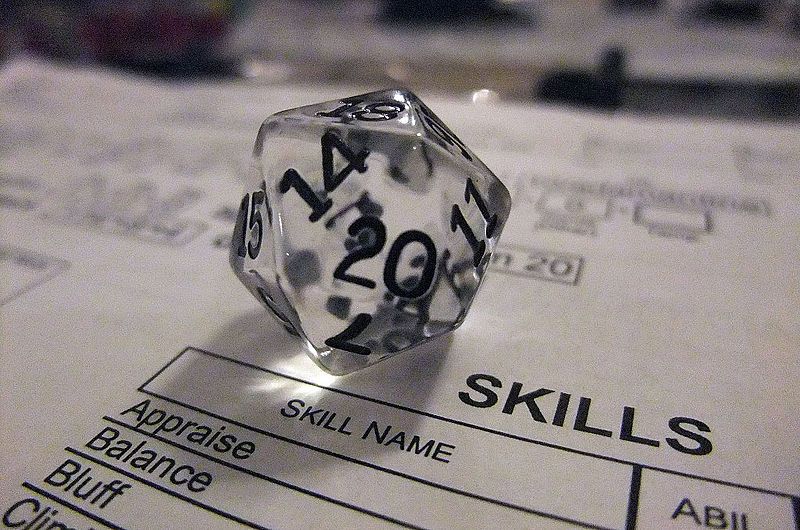 Becoming a game designer is a common dream for many young gamers, so much so that dozens of schools have sprung up in Canada and the United States hoping to train recent high-school graduates all the tricks and trades of an industry that has almost no common understanding of what it means to be a videogame designer. The role of game designer takes on a huge range of forms and even within a single studio a designer could be anything from a LUA scripter creating AI behaviours for enemy encounters to an attribute database manager managing game balance to a narrative writer creating a vivid world and characters to populate it. Thankfully there is one activity that game-design hopefuls can take part in that includes almost every one of these roles: the Dungeon Master of a Dungeons and Dragons campaign.

Dungeons and Dragons is a game that takes place in the collective imaginations of the participants and is guided both by the structure and rules of D&D and by the design of the Dungeon Master. The Dungeon Master (“DM”), also called the Game Master, has the role of creating the game world, content and experience that the players participate in. Since the events of the game take place within the shared imagination of the players the DM’s options for creating a game experience are nearly limitless, not unlike beginning pre-production on a new videogame – the limiting factor isn’t imagination or creativity, it is the amount of complexity that can be delivered to the players in the time (and budget) available. Because of this becoming a Dungeon Master and running a D&D campaign is excellent preparation for becoming a game designer by almost any definition and many skills a DM learns on day one are notably absent from modern game design theory.

Handling Player Agency
The Dungeon Master’s job is to create the interactive content of their game world. Every character, quest and piece of dialogue the players encounter is created by the Dungeon Master, and often being forced to improvise while doing so. Since players have nearly limitless agency in an imaginative world it is up to the Dungeon Master to adjust to player decisions on the fly while maintaining a consistent and mechanically sound game world. This is a constant problem for videogame designers as well – what if the player goes left instead of right? What if the player shoots his ally instead of the enemy? How does the videogame designer create a consistent world and still allow for player agency? The prevalence of games that artificially and obviously disallow the killing of innocents and allies is a ubiquitous example of when games fail to find this balance – something a good Dungeon Master must do on a nearly constant basis during a D&D session. This experience is invaluable and forces the DM to develop comprehensive and expedient problem-solving skills.

Many well-planned D&D campaigns have been ruined by a player obtaining and exploiting an ability overlooked by the Dungeon Master. Consider this scenario: the player obtains a divination spell that allows them to spy on their arch-nemesis instantly learning much more than the DM intended them to learn at that point in the campaign’s progression. The Dungeon Master must choose to either let them learn what the spell allows and re-plan a large portion of the campaign, or find an excuse to disallow the spell. The former is a lot of work for the Dungeon Master, but the latter can be a transparent ploy that the players will usually see through and immersion will be broken. Dungeon Masters learn how to blur the edges of these choices and maintain campaign cohesion without making the players feel like their ingenuity is being punished. In this case the Dungeon Master might propose that the arch-nemesis has a magical item that prevents the players spying on his plans and that the players must steal it before their divination is successful. This strategy gives the players a compelling reason for the decision and gives them the opportunity to overcome it later, giving the DM time to plan around the players’ new abilities.

The same scenario exists in modern videogames. No matter how brawny your hero is he can’t break down a locked door or step onto waist-high walls intended to block progression in a certain direction. Another common example is disallowing certain equipment to be equipped in an RPG game due to level requirements. These “gamey” mechanics break immersion and experienced game designers learn how to avoid them. Experienced game designers find ways to reward players for thinking outside of the box without compromising the integrity of the experience.

Finding Your Scope
The temptation of first-time Dungeon Masters is to build an epic world with monstrous villains, intriguing characters, massive dungeons, clever traps and heart-wrenching twists and turns. Similarly, if you ask a prospective game designer in high-school what their videogame would look like they’ll tell you of epic fight sequences, endless player choices with branching consequences, limitless progression and ambitious game mechanics. In both cases the designer’s failing is not only in scope but in understanding how player choice and player options increase design complexity exponentially. Inevitably the Dungeon Master in this example realizes that their planning in any given area is far too shallow and must improvise – usually badly – to compensate. The videogame designer in this scenario will find themselves constantly trimming features until very little of their original vision remains.

Every time a Dungeon Master adds a new “feature”, such as a world economy or a new technology he or she must fully understand how every other feature of the game is made more complex by the inclusion. Understanding how to create an immersive and fully-featured game world within a manageable scope is critical to the success of a D&D campaign just as it is critical to the creation of a videogame.

Letting the Player Tell the Story
Most Dungeon Masters love storytelling and often get caught up in creating elaborate plots that an untold number of characters will relate to the players. This makes sense as creating a narrative with the players is a critical element of immersion and in encouraging player investment in the campaign. This is no different in videogames that use a story – even if it is just a macguffin – to push the player forward and offer a more satisfying conclusion than a high-score screen. However it is easy for the storyteller to begin sacrificing player participation for the sake of their craft. This is counter to the intent of both Dungeons and Dragons and most videogames. A good Dungeon Master will learn how to tell a compelling story while letting the true “actors” – the players – play out their part in the narrative.

Games that intend to deliver a good story must attempt this as well. Titles like Mass Effect 2 are successful in their storytelling because the player has an active role in the unraveling of the story even if they can’t (or better yet don’t want to) change the ultimate outcome of the tale. No one understands this concept better than an experienced Dungeon Master.

Failing
Failure is a part of any game and Dungeons and Dragons is no exception. Without the ever-present threat of death there is very little tension or sense of challenge since D&D campaigns don’t have savegames. Death in Dungeons and Dragons is usually permanent and the player is forced to create an entirely new character if they wish to keep playing. The best Dungeon Masters learn to make the players question whether every enemy encounter will be their last. Failure shouldn’t only apply to character death either, it should apply to the game world itself. If the players fail in part of their quest there are real consequences – perhaps a village is burnt to the ground and the residents massacred. The players must then cope with this failure and carry the regret of their failing long after the DM is done describing the horrors that they failed to stop.

Most videogames since Mario have had only one penalty for failing: time. If you die all you lose is the time it takes you to reach that level again; Princess Peach isn’t in any more or less danger than before Mario’s death. In the case of many modern first-person shooters, especially on PC, the quicksave button is just a reach away resulting in every bad choice or encounter being immediately erasable and retried. Dungeon Masters never offer this luxury to their players and the players’ choices are immensely empowered.

Learn Videogame Design Now
This is not in any way a comprehensive list of overlapping skills between Dungeon Masters and videogame designers. Other topics such as encounter and enemy creation and balancing, storytelling with environments, creating a “living” world and maintaining a sense of realism are other skills that an experience Dungeon Master can transfer to the world of game design.

That being said what are you waiting for? If you’re interested in game design as a career find a group of friends who want to try something new and start your own D&D or other role-playing campaign. Start small at first with one of many pre-made modules for D&D that guide a new DM through the first few dungeons and adventures. Also, Dungeons and Dragons Edition 3.5 has been made into “Open Game Content” which allows the rules and content to be published freely on websites like the D20SRD making the fairly expensive core rulebooks unnecessary. As you play take note of your design decisions and consider why some failed and why some succeeded – this level of analysis is critical in game design on all levels.

Running a D&D campaign isn’t the same experience as designing your own videogame and serious designer hopefuls should definitely investigate game schools, but Dungeon Mastering undoubtedly teaches many core elements of what makes a game entertaining and immersive. The lessons you learn will put you above other candidates and may even help push game design itself forward.